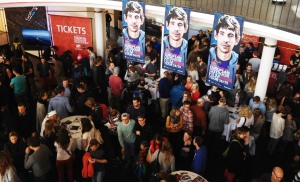 As a lover of adventure tourism and outdoor activities the European Outdoor Film Tour (EOFT) belongs to one of my favourite annual film festivals. It stops in over 100 cities in 6 European countries and presents the world’s biggest outdoor and adventure movies which contain a mixture of “breathtaking extreme sports and epic documentaries. It combines kayaking, alpinism, mountain-biking…and gets close to the personalities behind the athletes!” 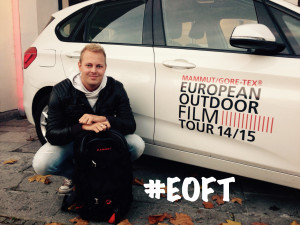 After attending it in 2013 I was delighted. About 9 nine short films which are captivating through their extreme adventures,  personal stories and the tremendous landscapes all captured through fascinating camera technique. After the show I had some very inspirational talks with some people who are involved in the EOFT. This year I was so lucky as I was not only invited to the “friends and family” breakfast but also to win the first prize of the festival’s sweepstake. A practical premium Mammut alpine outdoor backpack! Oh man, I was happy. 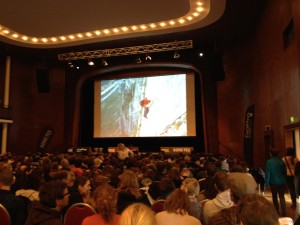 In the end, mostly all movies wereso inspiring and exciting as they not only showing how humans are reaching or overstep their bounds in extreme places in extreme situations but also as they perfectly deliver the message that you should listen to your inner voice – your desire of what you really want to do with your life. You only live once and you are the only person who is in charge to make yourself happy and to satisfy your needs and desires.

Last year I was most inspired by Kyle Dempster’s story “The Road from Karakol”. He is a funny American guy who was cycling 1200km all alone through the country of Kyrgyzstan in Eastern Europe. Quite an epic adventure to cycle through lonely landscapes with no paths and in which you don’t see any sign of life in 100kms, checkpoints which are guarded by corrupt ex-Soviet soldiers, unclimbed alpine rocks, deserted towns and broken river bridges which still needed to be crossed. All in a country where people hardly speak English. So, no means of communication except a camera which sometimes acted as a virtual partner as there were times in which he did not speak to anyone in a long time. I got the chance to talk to Kyle after the show. It was quite inspiring to hear about his mental up and downs during such a unique adventure. Watch it and you will know what I mean.

The most inspiring movie for me this year is called “Nobody’s River”. The four girls Amber Valenti, Becca Dennis, Sabra Purdy and Krystle Wright were kayaking the Amour River, one of the last of its kind river which still flows freely from its source to its mouth. They started on the free-flowing river in Mongolia to Russia where the river ends in a massive delta. Their journey lasted two months. A 5000km long adventure full of contrasts, stunning landscapes and extreme situations in which they were growing together as a team in good, tough and complicated times. A film which celebrates the fact of being alive – every day at every moment. There is always a reason to celebrate is what they call it. Take a look at the trailer and you will be curious about the full documentation.

I can’t wait for next year’s EOFT. In some cities, as for example in Munich they are even showing a rerun in some of the city’s open air cinemas in summer 2015.
(Video credit: Kyle Dempster and Amber Valenti)

Previous ArticlePreserving Somali Culture – Sustainable Tourism in the UK
Next Article What is sustainable tourism & why is it important?