It is indeed remarkable; now we have been on the road for more than two months already. The people we meet, the exchange of personal stories and the question where we are going to spend the night…, every day is truly special. And when I think that it cannot get any better, more eventful or inspiring, I am once more surprised to discover the opposite. This is especially true for our last weeks in Serbia. And the wave of euphoria does not cease here either: Belgrade! One of the biggest cities in Southeast Europe. A city that has been fought over hard for centuries, but eventually was reconquered by the Serbs. I am also spellbound by this city which reminds me of, wait for it, a mixture of Sydney and Berlin in the 90s – a true underdog of Europe and an extreme contrast, I know. 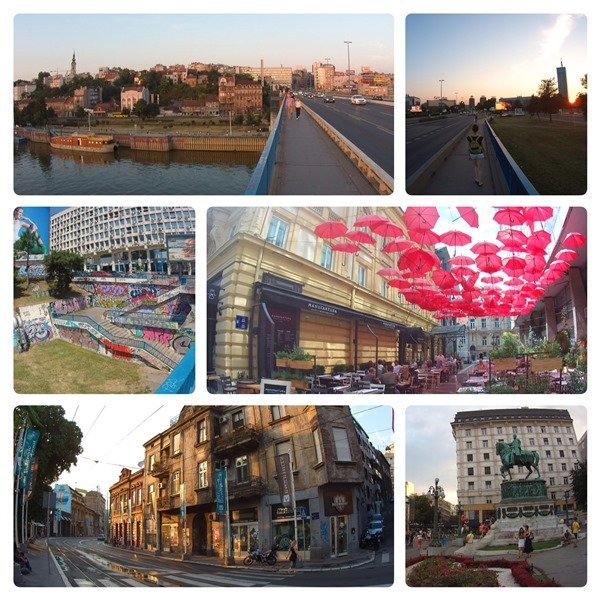 40 degrees Celsius. What are we going to do in this heat? Something that has to do with water! Neman, who offers outdoor tours in Serbia together with Ivan, invites us to explore the Danube and the nature of Belgrade with him by kayak. We paddle along Great War Island, stop at Lido Beach and view rusty shipwrecks from wartime from within the immediate proximity – Belgrade is unbelievably steeped in history. In the afternoon we reach our destination. We are meeting Darko on the outskirts of Belgrade. He is in charge of pushing forward the eco-tourism-project ‘Supernatural’ which used to be an old dumping ground for construction waste before it was carted off laboriously by Darko and his friends with the aim of conserving nature as well as more than 220 partly protected bird species. Both Neman and Darkoquit their well-paid office jobs a few years ago in order to live their dream and give something back to nature – awesome, this is how it has to be! 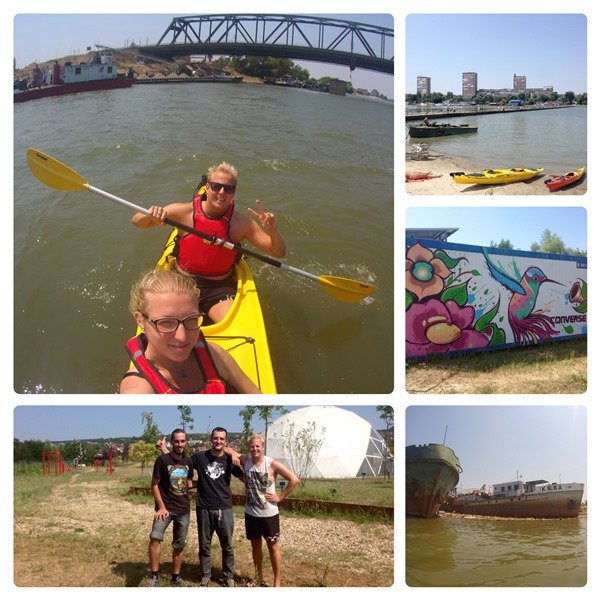 And now? Sunstroke! It annoys me a lot to be hanging over the loo all the time. I need to rest for a few days. Babs gets sick shortly after. After a couple of days being forced to stay inside, it feels so liberating to be back outside again. We are standing on the vantage point of Gardos at Bulevar Nikole Tesle in Zemun. The sun is setting over the Danube and suddenly everything seems so small and trivial next to the beauty of this place, it seems even more overwhelming. The next day: The wave of inspiration has still not subsided. Zeljko invites us on his different city tours. Today the communist tour will take place. Wow, wow, wow, where am I going to start? First of all, Zeljko: A young and gifted storyteller with Yugoslavian roots who is able to tell the history of Serbia and Yugoslavia as informatively, enthusiastically, entertainingly, and proudly, as probably hardly anyone else is able to do, and also from a neutral perspective. Believe me, after ten years of traveling in more than 30 countries and with my professional background in tourism, I am able to say that I have been on many tours and have met many tour guides but none of them captivated me as much as Zeljko did. 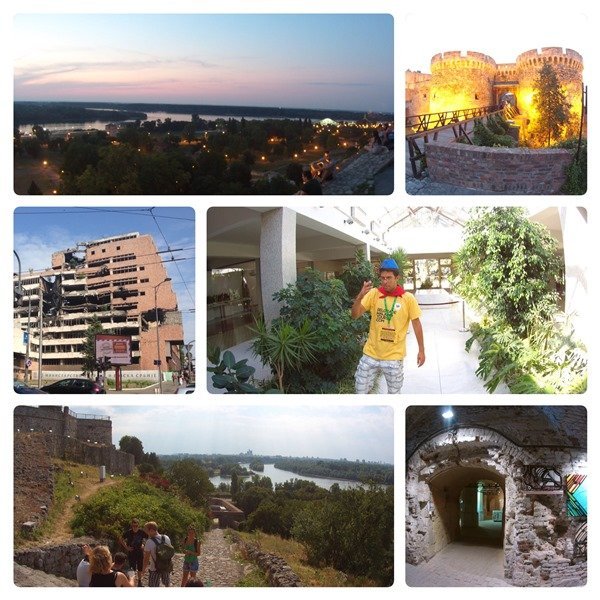 The best story was told in the Belgrade fortress – Kalemagden. There was an electronic night club in existence here in this fortress between 1995 until 2004 which was one of the top 10 nightclubs in the world and was called Barutana. I would love to have gone there back in the day. On the last day in this city full of contrasts we chill with Chillhouse Lounge Music and the Ibiza feeling at Lake Ada Ciganlija – a lake in the middle of the city. As so often before we stayed longer than we had planned – in total we spent almost two weeks in Belgrade. To put it briefly, I love #slowtravel, which for me is the only true way of traveling in order to really get to know places and people. We saw a lot, did a lot and got to know awesome people. Thanks to Pascal, Oliver, Nikola, Nemanja, Darko, Zeljko, Ivan, Nenad, Ljiljana, the two Anas, Marija, Jelena, Alex, Ivana and Jovana for the awesome time we had with you here in Belgrade. 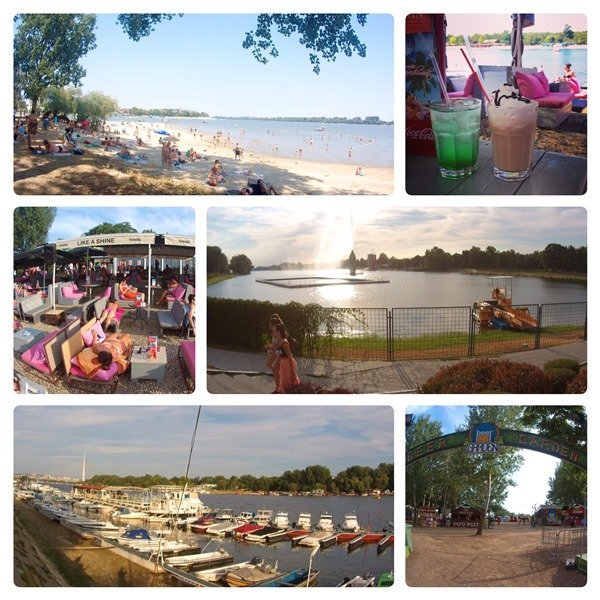 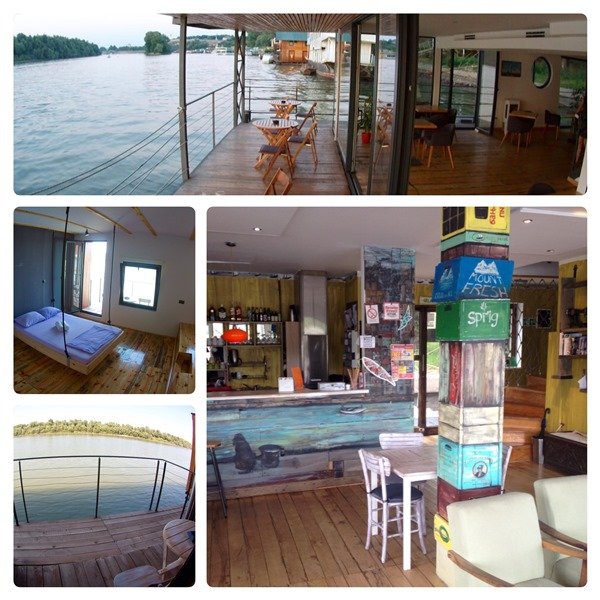 Interested? Here, I have some valuable tips for your stay in Belgrade:

Make sure you meet Zeljko and get inspired by his stories on one of his tours at BelgradeWalkingTours.com. The communist and the underground tour are by far the best. During summer it is often very warm in Belgrade, cooloing down is therefore very welcome. Explore Great War Island and Lido Beach and Lido Beach by kayak together with the guys from belgradeadventure.com. Alternatively, you can also explore Belgrade’s nature by bike and at the end relax by the city lake Ada Ciganlija. During the summer the lake is definitely worth a visit!

Accommodation at Bulevar Nikole Tesle directly on the Danube:

Do you prefer a sociable, international and young atmosphere? If yes, then you should stay at the Arkabarka Floating Hostel – in 2007 it opened as the first Floating Hostel in Europe and the staff is amazing and very kind. Ask for the double room with private balcony – awesome! Do you prefer to rest a bit instead and stay in a place that is a bit calmer and not so busy? Then you should definitely check in at the San Art Floating Hostel. Here you will be served traditional breakfast whenever you get up (!) and a cosy atmosphere, also very recommendable.

You can get good food in the street called “Goce Delceva”, on the Bulevar Nikole Tesle as well as in the Ušće Shopping Centre; all of them are close to the hostels.

My 8 favourite places along the Danube in Serbia626 Total Shares